As some of you may have noticed, I pretty much skipped the northeast part of my planned trip. This is my own fault, and I explained a bit of my reasoning in my first post. I really had trouble leaving Colorado and got going later than I needed to. In all fairness, a major life shift like this always takes more time than expected. I should have known it wouldn’t be easy to pack up my entire life in the course of a couple of weeks, but I also did delay at times.

Before I got going I went home to visit my family in Maryland and New York, and to bring my dog to stay with them during this journey. While I was back east, I initially planned on skiing at Snowshoe, Killington, Sugarloaf, Sunday River, and Tremblant. It turns out I didn’t make it to any of them. The decision to skip those areas was tough, and even as I drove north from New York last week, I still planned on going to at least a couple of them.

Once I left New York and got going, the weight of this trip sank in. For the first time, my home was also my truck. Each night I’d have to find places to park and safely stay. I wouldn’t have the cozy warm place to go home to, but instead, I would need to find campgrounds, and pit stops along the way. An incredible feeling of freedom, but very scary at the same time.

I drove up towards the Adirondacks, and thought I’d continue on to some of the Northeast ski areas. That morning I stopped at Gore Mountain. It was packed, people were parking way down the street along the side of the road. Gore had a classic northeast ski area feel, no fancy hotels at the base, just fun skiing, surrounded by beautiful land. There were quite a few people there for the holiday weekend.

I’d forgotten what it was like skiing back east, 5 years in Colorado has spoiled me. Gore is the biggest ski area in New York, so there is plenty of space to get around (trail map). The top of the main lift was extremely crowded, but I made it down to the back side of the mountain where the steeper trails are and I had the place to myself. Views for miles. There were some steep drops that I was able to rip down. A run called “Lies” was my favorite of the day. Steep and relatively easy to ski fast. Get on the edge, look down, and point my skis down the line I wanted. 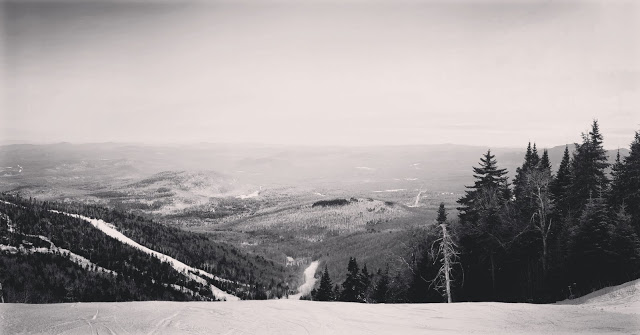 I left that afternoon to continue on my journey. While I wanted to ski more in the Northeast, I knew that time was not on my side and it’s getting somewhat late in the season. If I wanted to make it to the big areas, I had to get going west. My planned stops include Big Sky, Fernie, Kicking Horse, Mount Bachelor, Snowqualmie, and hopefully then making my way up to Alyeska. All of this over the next 2 months.

I turned west towards Rochester and on the morning of Sunday Feb 18th stopped into Glen Edith Coffee Roasters to get the first post on my blog up. I had a delicious pour over coffee and wrote. My good friends Mike and Sarah who I met when I first lived in NYC (16 years ago) live nearby. I had the chance to meet with them while I was there which was really great.

I’ve done the drive from New York / DC to Colorado 5 times now, and this time I was on a much different path. I was already pretty far north, so why not see some of the sights along the way? Hmmm, Niagara Falls, the Great Lakes.

You can’t imagine how big the falls are until you see them. Incredible. I parked my car,  probably 1/2 a mile away and I could hear the roar of the water from there. It only got louder as I approached. It was late in the afternoon and the sun was setting over the Canadian side, the cold mist sprayed towards me. There were massive ice chunks down the river. Spectacular. I’m not a gambler, but I was also surprised how many casinos surrounded the area. Maybe I should try my luck sometime, maybe not.

I continued on over the bridge and crossed into Canada. Next stop, Toronto.