On the morning of March 3rd, I was still at Big Sky in Montana. Even that morning, I was considering heading west to Washington State, Oregon, or going north into British Columbia.  I kept seeing this amazing forecast for Utah. I decided to head south and hope to hit the storm. Posts on “Open Snow” “Unofficial Networks” and elsewhere said that the resorts in Utah were expecting over 2 feet of snow. Given that I was only 6 hours away, I had to chase it. I’ve visited Utah in the fall for some amazing hikes there, but I’d still not skied there. Utah is known for the “Greatest snow on Earth” they even have that on their license plates. I soon understood why.

I finished up skiing at Big Sky and got on the road that afternoon. The snow was not supposed to start until around 8 or 9 and I was hoping to get to Salt Lake before then. After passing Yellowstone, the weather in Idaho got bad, the roads were not plowed and barely visible. The highway was down to one lane of traffic and slow. I really didn’t want to get stuck there, and if it was snowing this much, I also really wanted to ski the following morning. For about 2 hours, my drive was pretty scary. Once I got to Utah, it was a lot smoother, clean roads and the snow had let up for the time being.

That evening, I made it to Salt Lake and was lucky enough to have a place to stay. My friend Ryan previously lived in Salt Lake City and had many friends there. He introduced me to his friends Will and Jamie who very generously invited me to stay in their guest room. This was a very welcome change having spent as much time as I had in my truck. It was also nice to spend a few days with some new friends and people with mutual interests.

The Max Pass offers a lot of access to ski areas throughout North America, but unfortunately it is somewhat limited in Utah and California. In Utah, I had the option of going to Brighton or Solitude. Solitude and Brighton are often over shadowed by bigger ski area like “Alta” and “Snowbird” but it’s still an awesome ski area. Solitude has even been listed as one of the “Top 5 Underrated North American Ski Resorts in The USA” and “One of the top 20 ski resorts in North America” Sunday was relatively busy for a place with the name “Solitude,” but I was still able to find my own place on the mountain.

I caught one of the first chairs and on my way up, I could easily scope out where I’d spend most of my morning. A line called “Paradise” off the Powderhorn lift was fantastic. As the lines under the lift became skied out, I just had to venture a bit further for fresh turns. I spent most of the day with a grin ear to ear, an unforgettable powder day. I was unfamiliar with the mountain, but I found incredible skiing in the “Headwall Forest” throughout the afternoon. 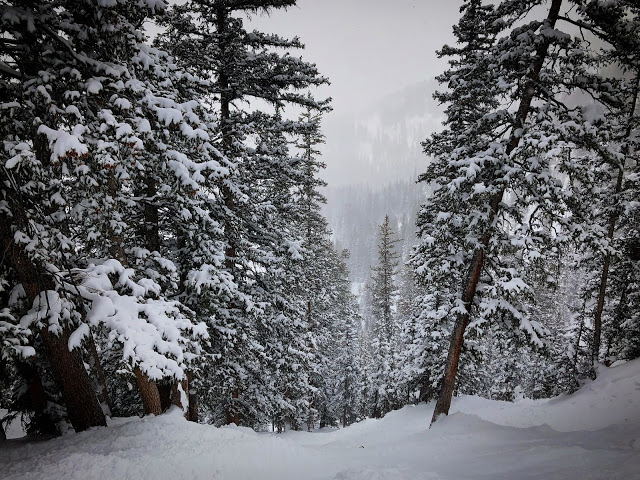 Solitude didn’t quite get the 2+ feet that was forecast but it snowed a lot, close to 20″ in just over a day. It was a Sunday afternoon, and as I drove back down the canyon, I was thinking about the following morning. It was still snowing and there was a lot of terrain that was closed all day. I knew that if that area opened tomorrow, there would be TONS of untouched snow.

We went out in Salt Lake for a bit evening, but I still managed to get up early that Monday. My friends thought that a lot of people were going to take a 3 day “powder” weekend. I’d better get up there early. I did, and was again on one of the first chairs of the day.

The entire part of the mountain known as “Honeycomb Canyon” was still closed. At the top of the “Summit Express” lift I was able to watch patrol traversing out across the canyon and detonating avalanche explosives. Anyone who has hiked through snow like that can appreciate just how difficult a job that is. And scary, the explosives were unbelievably loud from the top of the lift, I can only imagine what it was like where they were. Always say thank you to ski patrol.

I wasn’t the only one excited about this terrain opening. A decent size group had gathered by the rope and were waiting for Honeycomb to open. Just after 12, patrol walked out to drop the rope. It was a stampede, almost like opening day. Instead of following the crowd, I hiked along the traverse with a few others. 15 minutes hiking along the traverse that patrol had tracked out and we had our choice of 2′ + deep fresh snow. Fantastic. This was when I realized what Utah meant by “Greatest Snow on Earth”

Once I skied out of Honeycomb canyon, it’s a bit of a trek to get back there so I took my time. An hour or so later I arrived at the top of the same line, and it still wasn’t skied out, not even close. 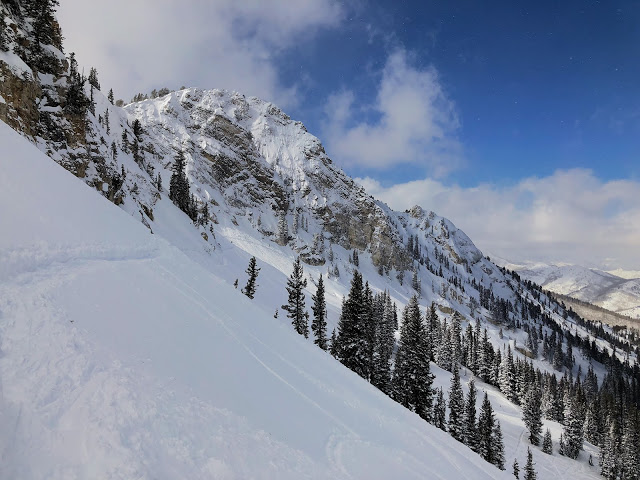 So so good. I skied out to the “Eagle Express” and did a few more runs on “Sunshine Bowl” and “Inspiration.” My legs were shot, and I needed rest. I made my way back to SLC and considered my next stop.

Even that day, I was still considering where to go next. While it’s not on my pass, I really wanted to go to Jackson, WY. Any skier has this place on their list, and I was so close. I drove north with that in mind and the following afternoon stopped at “Powder Mountain.” What a cool place.

Powder Mountain is huge, and they limit their daily lift ticket sales to 1500 people. Skiing there, I felt like it was limited to 150. I arrived later in the day, so I was pleasantly surprised to find out they also offer night skiing. While the night skiing is limited to a very small portion of the mountain, after a day off I was just thrilled to get turns in later in the evening. I wanted to ski there more. The snow was fantastic, the views for miles and miles, and no crowds.

I looked at my drive time for my next destination and I made the call to head to California. I had a couple of days planned that weekend to visit my sister and had just over a day to get there. Jackson had to wait. I know I’ll be back there in the future, and for a longer visit than I was able to commit to at the time. Next stop, California.