Mile 0 of the Alaska highway is Dawson Creek, BC. Already pretty far North. I’d been skiing at Kicking Horse in Golden, which was a fairly close drive to Banff and Jasper parks. From there it’s about 1600 miles to Anchorage. I’ve spent so much time on the road that it’s only now looking back that I realize how far I’ve travelled.
With this trip in mind,  I’d picked up a copy of the “Milepost” a couple of months ago and used it as my guide. It is incredibly helpful to have such a detailed reference especially when there are hundreds of miles without cell service. Every couple of hours I would pull over and take note of where the next stops would be along the way. I also closely watched my odometer and made note of how far it was in between stops. The first day I planned on driving to Liard Hot Springs, a 472 mile drive. I had a bit of a late start because I had to get my window fixed from the damage the prior day, but still had enough time. This part of the drive was off to a fairly uneventful start, but once I passed Fort Nelson, it was so beautiful. Stone Mountain Provincial Park, then through Muncho Lake. Just after sunset it began to snow, I wasn’t too concerned but it still made me a bit anxious as there are no services for miles and I wasn’t seeing very many other cars. Here’s a bit of video from that drive.

I don’t have any photos of the hot springs because I arrived after dark and in the middle of a snow storm. Here’s another persons story of a winter visit to the springs.
Although it was late, I wanted to have a soak in the springs, so I jumped into my bathing suit, grabbed my headlamp and walked down the snow covered path. On a quiet night, the walk felt a lot longer than it actually was. There were a few others there as well, but it was still quiet and very peaceful. The sky started to clear and there was a bit of moonlight. The sensation of being in natural hot springs under a moonlight sky was unbelievable. 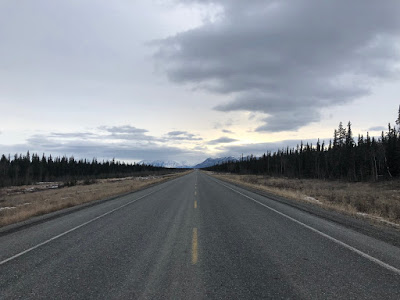 I had a ways to go until my next stop so I got on the road early the next morning. This time of year the days are getting longer and longer, which makes driving later in the day easier. I figured I’d make it to Whitehorse, the capital of the Yukon. I got there, checked the map and figured I might have another 2 days of driving ahead. I was hoping to do it in 1, so I continued on to Haines Junction. A beautiful stopping point and close enough to Alaska that I knew I could finish the drive the next day. About 600 miles to go to Anchorage. 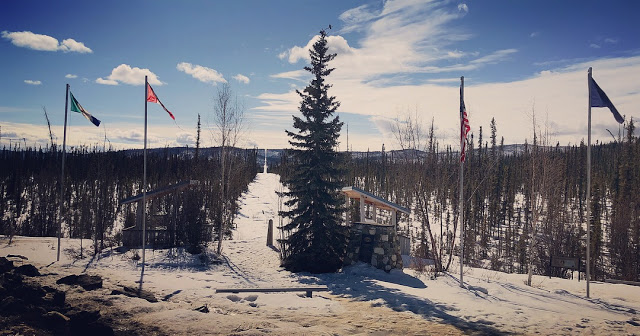 When I arrived the US / Canada border I stopped for a few minutes before crossing customs. There is an unfortified boundary cut between the trees for as many miles as I could see. I stood right on the border for a few minutes and thought about how powerful that is. A sign there read, “This unfortified boundary line between the Dominion of Canada and the United States of America should quicken the remembrance of the more than a century old friendship between these countries, a lesson of peace to all nations.”
I won’t get into the politics, but consider that for a moment. That sign was erected on May 31st, 1982, only a few months after I was born. Consider how much has changed since then. I wish that we were still in that mindset, ‘A lesson of peace to all nations’
As I got closer to Anchorage, the landscape changed a couple of times, from trees to mountains. I felt like the views were just getting better and better.

That evening I made it to Anchorage before resting for the night. Luckily, I was able to meet at a friend of a friends place and had a comfortable place to stay for the night. The next morning I’d be skiing at Alyeska.